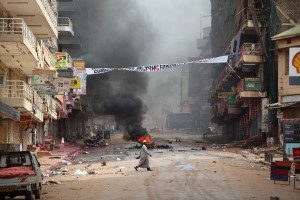 Kampala looks like a ghost town during the Walk to Work protests that rocked the country in 2011. Photo image: Echwalu Edward

2011 goes down in Uganda’s history as the year the people said Enough! The Presidential elections held in February saw the incumbent win with a 68.38% majority and in a gesture of election win splashed the city with a strong presence of military and police personnel. Uganda started to look and feel like a military state, where even sneezing could be considered treason. When opposition group, Activists for Change (A4C), organized demonstrations popularly known as the Walk to Work protests in April/May over the rising fuel and food prices, the government came down hard on the protesters. Indiscriminate shooting and use of tear gas showed how trigger happy the new police recruits were.

The shameful arrest of Dr Kiiza Besigye made world news; his arrest trending in Yahoo top 10 news searches. For a man whose political star and charisma was declining, these arrests gave him a second chance. It was manifested in the crowd present to welcome him from Nairobi, where he had gone for treatment for injuries caused during his brutal arrest. Reports indicate it was much larger than the one at the Presidential Swearing-In Ceremony on the same day. The common man feeling disenfranchised associated with him and the message of social protest. He represented their suffering. The protests hit different towns across the country.

The rising fuel, food prices coupled with the depreciation of the shilling against the dollar were hitting all sectors hard. For a government disinterested in the plight of the people, the quick use of tear gas that came in all sorts of colors showed the misdirected government priorities. While a lot of money was spent on trying to quell the protests, little was being done in the economy. Reports in the East African stated that the government was broke. Money had been diverted to fund the NRM campaign, and reports were that it would take the country three years to recover. The rest of the year was hit with a record high inflation, the Ugandan shilling at one point being named the worst performing currency in the world.

Uganda Radio Network reported that the Kampala City Traders Association (KACITA) led a two day strike in July to “protest against government’s failure to control the depreciation in the value of the shilling against the dollar”. The Daily Monitor in December reported that KACITA was going to strike over high interest rates, continuous power outages and high rent.

Public servants from primary and secondary school teachers to university lecturers lay down their tools. The biting economy was hitting them hardest. Teachers who make up the largest load of public servants are the worst paid of the lot. This group tasked with educating the nation’s young is largely ignored. The impasse between the teacher’s group and government was further compounded by remarks from the prime minister threatening to sack the teachers who were striking. Cowed into submission, the teachers went back to work. However, newspaper reports indicate the teachers intend to resume their strike on 19 January 2012, two weeks before the school term opens on 30 Jan 2012.

Social protest is taking deep root in the Ugandan psyche now and with impending teacher’s strike, 2012 promises to show us more of these. I will start blogging for the Democracy Lab blog of the Foreign Policy magazine starting January 10 2012 where I will cover related issues.